Eating Disorders (EDs) are not exclusively diagnosed in girls and women. In fact, the diagnosis of EDs in men seems to be rising. However, it is difficult to know the true prevalence of male EDs due to the stigma in our society and views of EDs as a “feminine” problem.

Consequently, many men do not get properly diagnosed or do not seek treatment at all. But some studies have indicated that as many as 1 in 4 new eating disorder cases are male. In 2002, the NIMH found lifetime prevalence rates in men of 0.3% for anorexia nervosa, 0.5% for bulimia nervosa, and 2% for binge eating disorder.

Men with EDs may share many of the same characteristics as women with EDs including low self-esteem, perfectionism, over-achieving qualities, conflict avoidance, anxiety, depression, a need for control, difficulty expressing emotions, feelings of unworthiness, feelings of self-loathing, need for acceptance, and poor body image. However, there are some important differences between men and women with EDs. First, men seem to develop eating disorders at a later age than women. Typically, men are overweight or obese before they develop an eating disorder and they are often bullied or teased about their weight as children. Men are more likely to suffer from co-occuring addictions to alcohol or substances; and they often experience more sexual anxiety. Some men develop disordered eating habits through involvement in sports that have expectations about body types or weight. For example, wrestlers are often required to drop weight suddenly in order to make a certain class and football players are often encouraged to bulk up or gain weight, be it muscle or fat. Interestingly, Dr. Arnold Anderson coined the term Reverse Anorexia or Bigorexia where an individual believes that he can never be big enough so he continues in efforts to bulk up and gain muscle mass.

The graphic below can be found at: http://nedawareness.org/sites/default/files/LearnMalesED.png 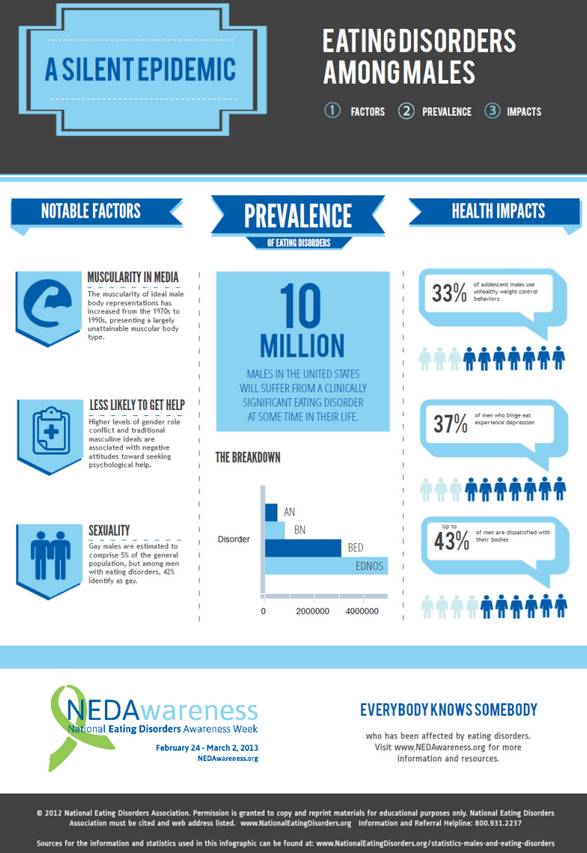